Mark & I spent last weekend at the National Diving & Activity Centre to finish off our last two diving speciality courses.
We took the train from a rammed Paddington on Friday afternoon and arrived in picturesque Chepstow a few hours later. 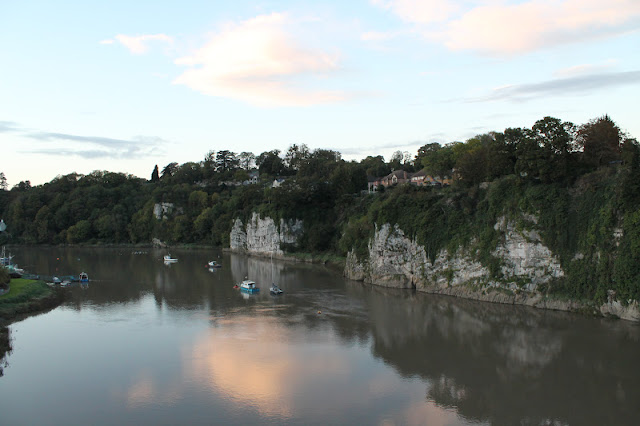 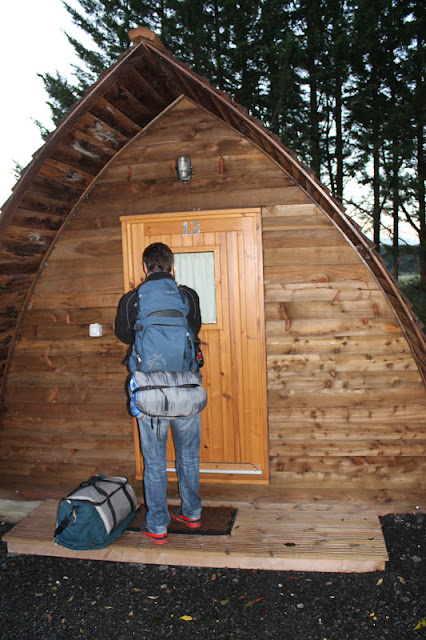 Here I am...Hello there!
Wearing my outdoorsy clobber :) 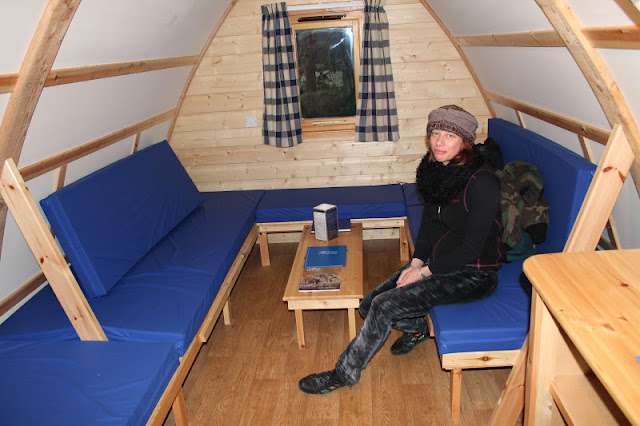 Our awesome instructor Andy & his lovely wife Lesley also arrived on Friday night, so we all met up at the cafe/bar for some grub and chattery.
Then it was off to bed, to catch some Z's before Saturdays Wreck diving extravaganza.
Saturday morning... 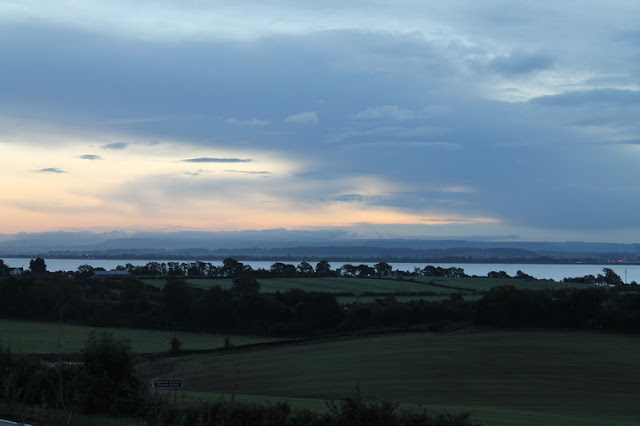 It was a little bit nippy but after a "full English breakfast" minus the meaty stuff I felt more than ready to brave the water. 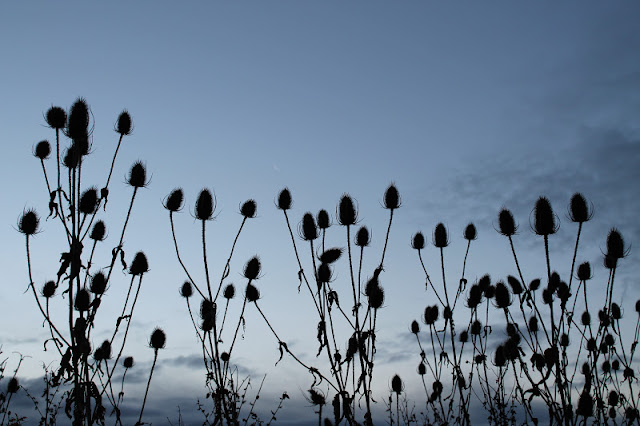 Dive Wimbledon, what can I say...
I'm so chuffed that we came across these guys, they have been awesome all the way!
I can't believe that less than ten months ago I had never even breathed underwater, now I can navigate a course in very poor visibility, I can hover and control my buoyancy by lung capacity, I can lay a line and penetrate a wreck and I feel like a proficient diver.
Never in a million years did I think that I'd end up feeling so fired up about diving.
When we did our open water course last February I thought that would be as far as I'd want to take it but after our very first dive in the Red Sea I knew that I wanted to go further.
I wanted to improve my underwater skills and also be able to dive deeper than the 18 meters you're allowed to as an open water diver.
So we signed up for five specialities; Dry suit, Navigation, Peak Performance Buoyancy (PPB), Wreck and Deep and we got our Advanced Open Water Diver certificate included in the price. 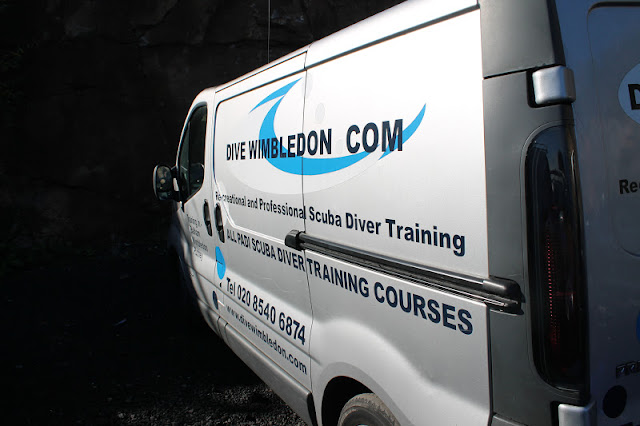 Here are our fellow students gearing up for the wreck diving on Saturday... 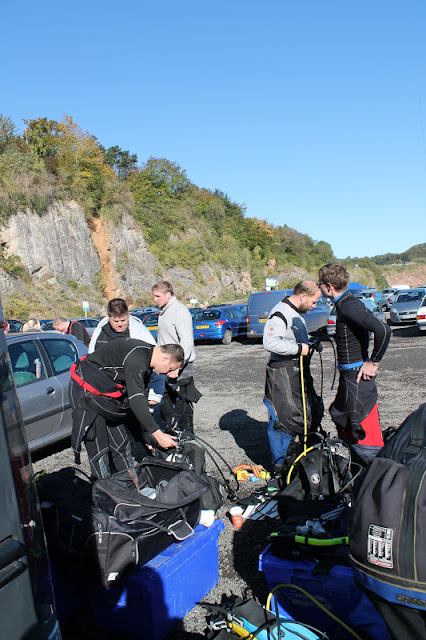 We did three dives and our wreck was a single decker bus.
1. Surveying the wreck and map any hazards and points of interest.
2. Lay a line outside the wreck, then follow the line back whilst closing your eyes, then retrieving the line.
3. Penetration dive, lay a line inside the wreck and retrieve the line.
Both Mark and I did really well and managed to bag our wreck certs, yay!
This is how happy and contented you look after a days diving... 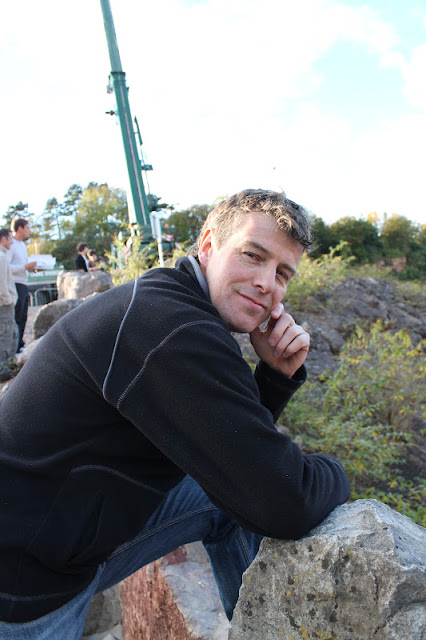 In the evening the whole crew amassed at the cafe/bar for dinner, drinks and much chin-wagging.
At ten I called it a day and snuck away for a rendezvous with my sleeping bag.
On Sunday morning there was mist in the air.
Before breakfast there were thin wisps of mist dancing over the water... 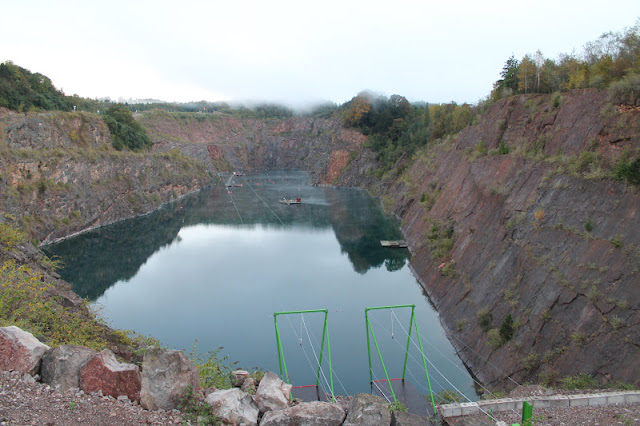 After breakfast you could hardly see the quarry for the thick mist soup... 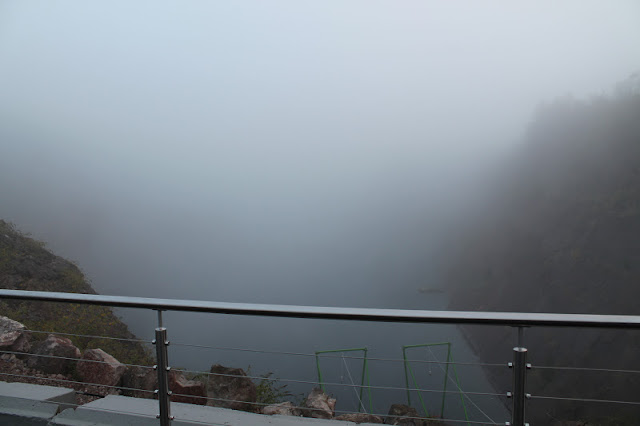 Mist-schmist!
We had more important things on our minds, like gearing up for the days first deep dive... 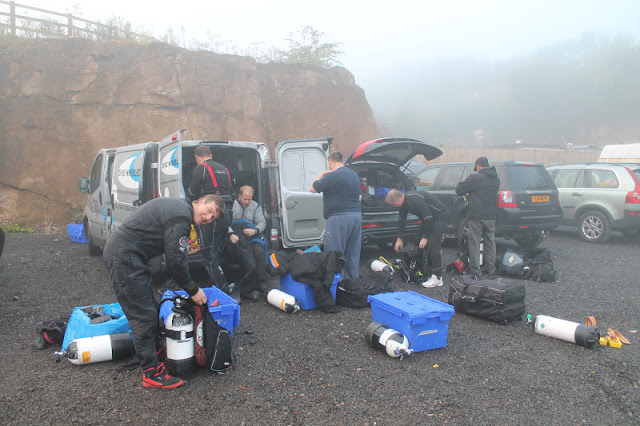 This was the car park before our first dive... 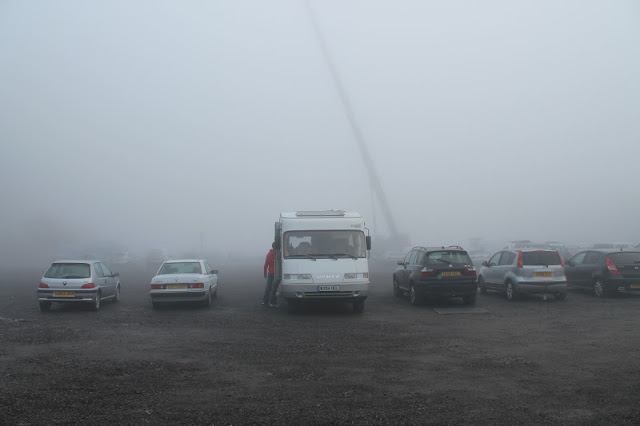 and when we got back up it looked like this :) 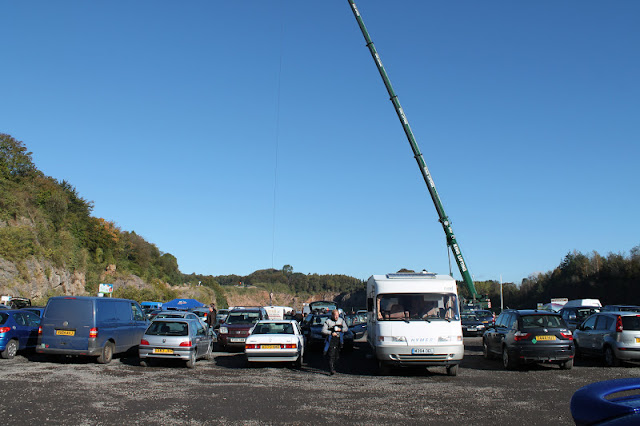 We did our three deep dives to the 'BAE 146 Aircraft' at 27 meters.
1. Navigating a reciprocal heading and looking at what happens to colour and a plastic bottle at depth.
2. Swimming around the aircraft maintaining neutral buoyancy, ascend and preform safety stop where you breathe from your buddy's alternate air-source for a minute.
3. The last dive was a bit of a fun-dive, we descended nearby the jetty and swam out to the aircraft, swam through the aircraft and then went on a short tour around a few of the underwater attractions.  I had brought a garden gnome with me which I planted nearby the Devon Aircraft at 25 meters.
I decided to named him 'Orinoco Browne'...
Orinoco from The Wombles of Wimbledon & Browne is the surname of Awesome Andy our instructor :) 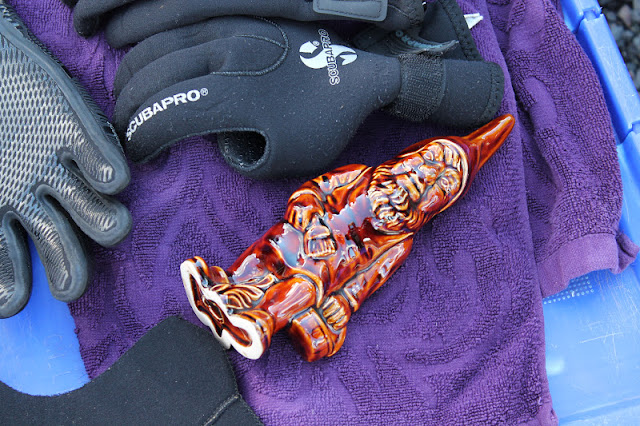 Happy hubby, the best diving buddy a gal could possibly wish for... 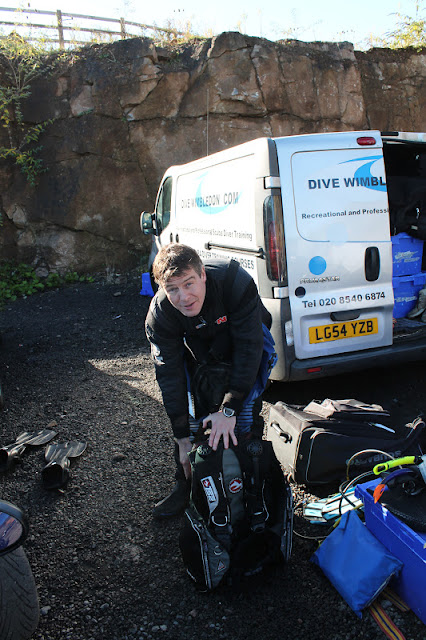 Me (in my gnome hat) and our fabulous fellow students in-between dives... 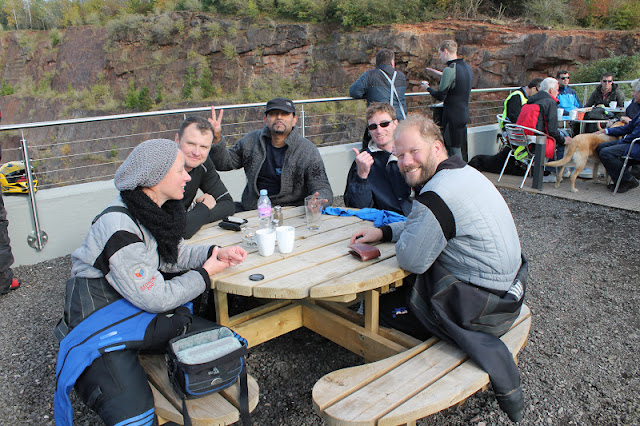 I had a cracking weekend and I have to say that I feel a little bit sad now that it has all come to an end.
In a few days the postman will bring us our Wreck & Deep cards and then that will be that...until next time ;)
We're already scoping out the rescue diver course for spring and hopefully there will be some warmer water diving on the cards before then. Diving ROCKS!
Before I sign off, I want to show you the awesome new stock that I've added to the shop recently, clicking on the pic will take you to the item... 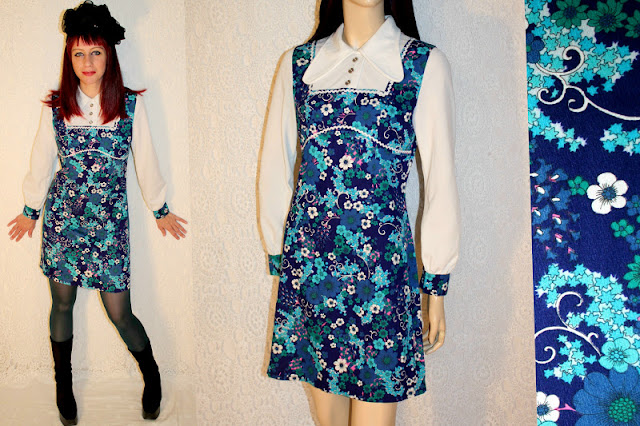 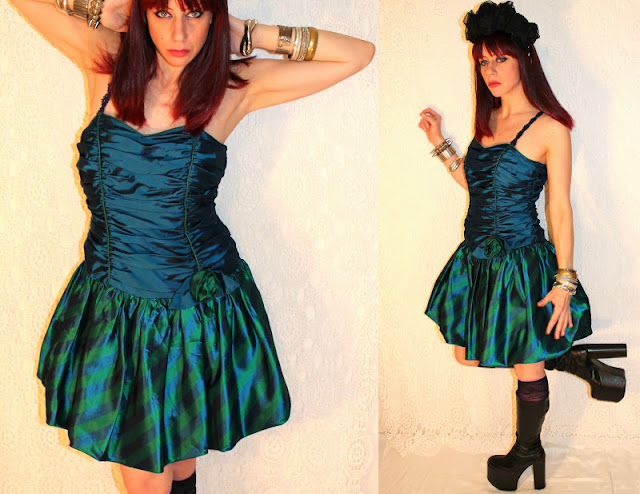 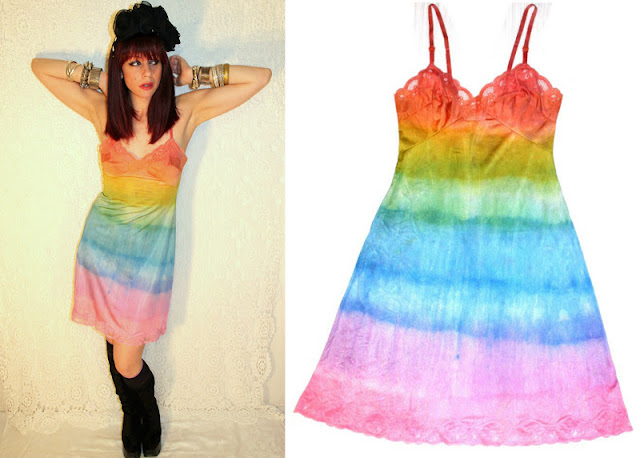 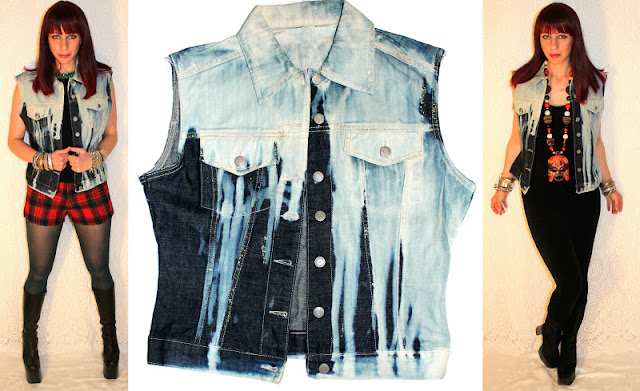 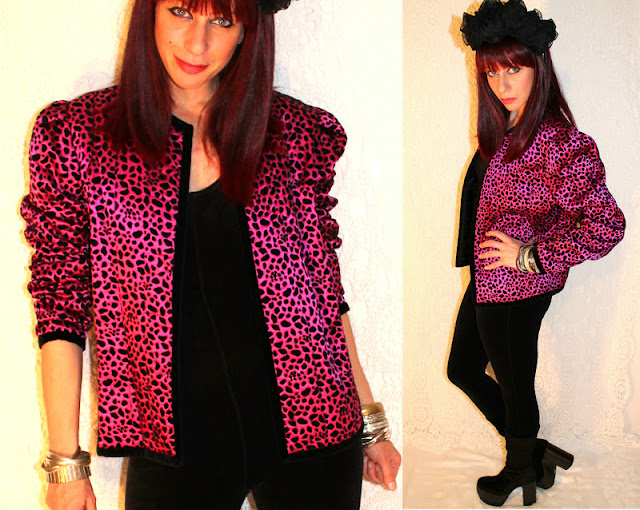 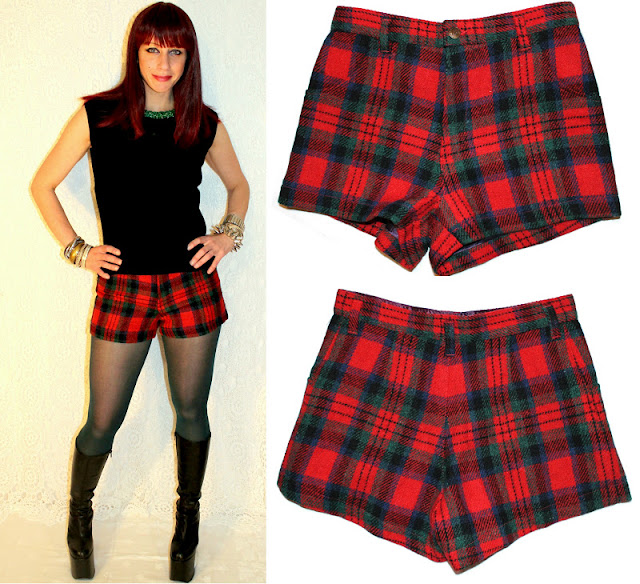 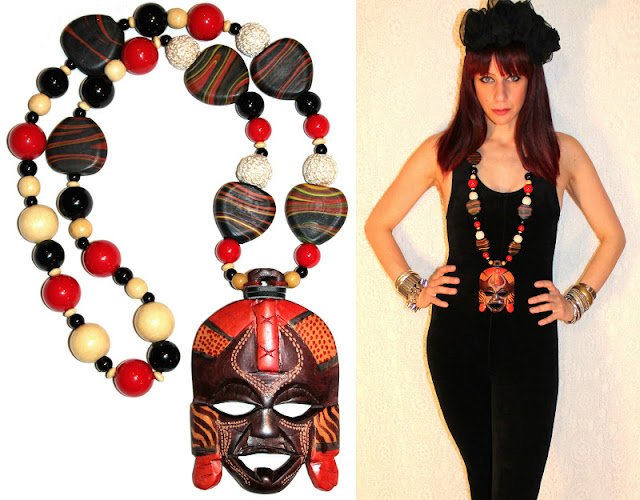 I'm so glad you're loving your diving! What a wonderful thing for both of you to do together.
I grew up a few miles from Chepstow and it used to be out day out destination. It's a lovely area and I used to love going to the castle ruin.
I'm rather liking you ebay goodies...I'm off to have a look.
Have a great rest of week.
xxxxx

Wow, that sounds incredible. You'll need to get underwater snapping. I used to go to basic pool diving stuff and have only once dived in the sea, which was just gorgeous. Other than that, there's just been a lot of snorkelling! Good on you pursuing it.

The rainbow slip dress is so lovely. Reading your post has really made me want to get back to diving. I haven't dived since having children and recently sold off my dry suit at a carboot, boo!

wow that is so cool!