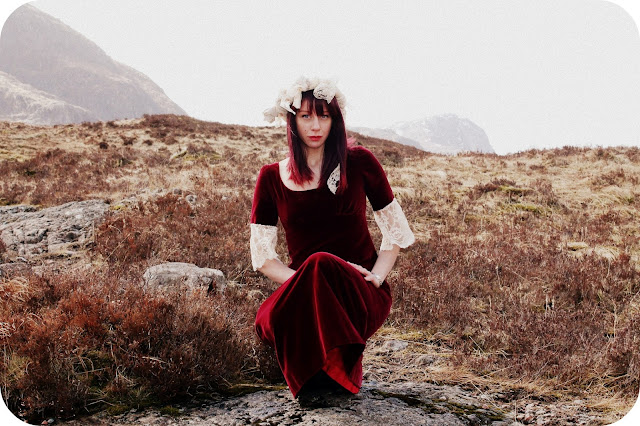 As mentioned in the previous post Mark and I headed up to Glen Coe for a wee photo session while we were up in The Highlands.
I had hoped to use the same spectacular backdrop as we did last September but gale force winds howling through the glen made it quite impossible, my skirt filled up like a tall ship sail and my wig was threatening to make like a bat out of hell down the hillside.
So we drove a little further down the glen to the car park at a view point so that I could get changed in the boot of the car without risking going arse over tit in the soggy heather whilst lacing up my granny boots.
Needless to say the people that were there had their eyes out on stalks when I stripped down to my scanties to frock up, not the kind of thing they'd expected to see in a tranquil Scottish glen I bet but rather than driving off in a indignant huff to report me for indecent exposure the cheeky wee sausages started taking photos of us taking photos instead. 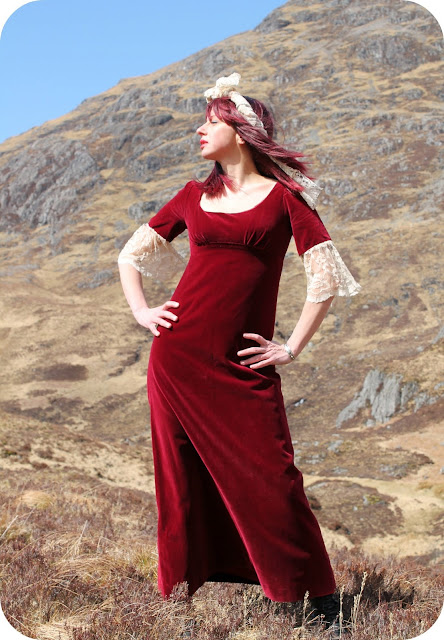 The first frock we shoot was a present from my sister Jessica a few years ago. It's labelled QUAD and is from the late 60s or early 70s. I love everything about this frock, its alluring bust enhancing cut, the virginal white lace sleeve trim and the deep blood red velvet. Wearing it makes me feel as if I should be in a classic Hammer Horror movie being seduced by Christopher Lee or Peter Cushing. 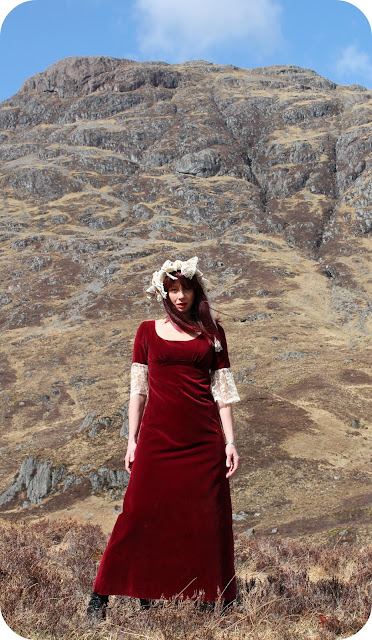 The wreath that I'm wearing is one that I made from some magician's rope and a bunch of lace off-cuts that I bagged at a car boot sale a few years ago.
It was a saving grace on the day cause it stopped the wig from flying off. 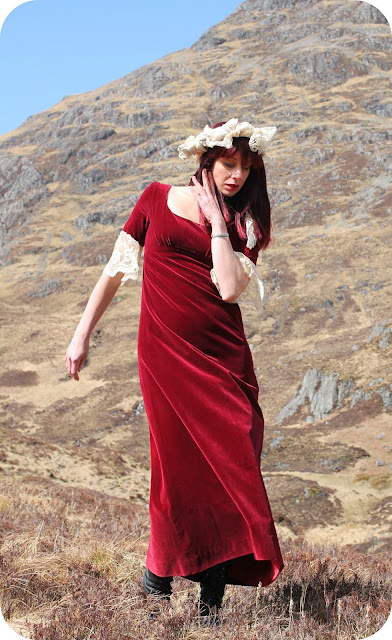 The evening before we took these pics I somewhat overindulged on my all time favourite ale FRAOCH made with heather and bog myrtle. It is the best tasting ale ever but unfortunately it gives me a rancid hangover, och!
Anyroad it's not about my face, it's all about the frock, behold her splendor ;) 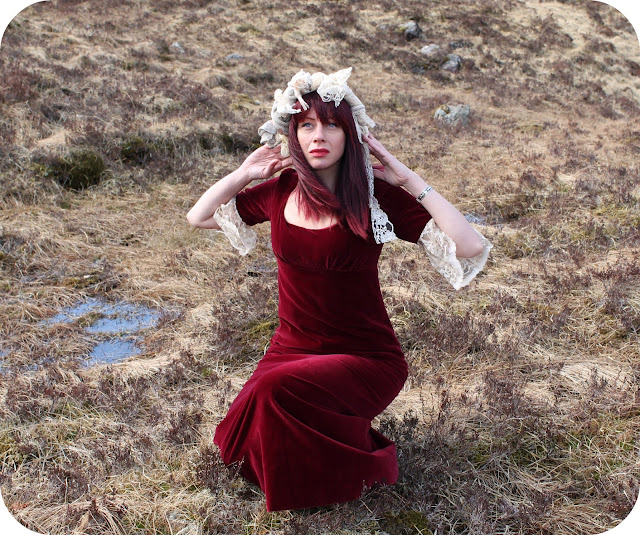 We only managed to shoot another frock in the glen and then we did another little session by the shore of Loch Leven but I've decided to split the sessions into three posts rather than one epic one. 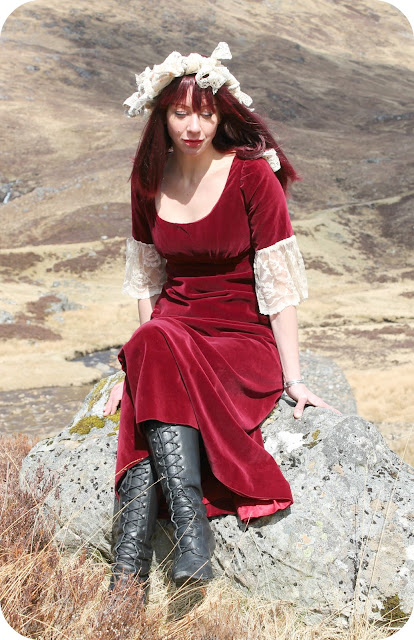 Hope your week has got off to a fabulous start. I'm slowly getting round to catching up with you all and I apologise profusely if I haven't made it round to yours yet. I was a bit scuppered today after having to perform emergency surgery on my cactus that I've had for years, damn you root rot or perhaps more to the point damn me overzealous waterer of plants. Hopefully it will be fine, fingers crossed. 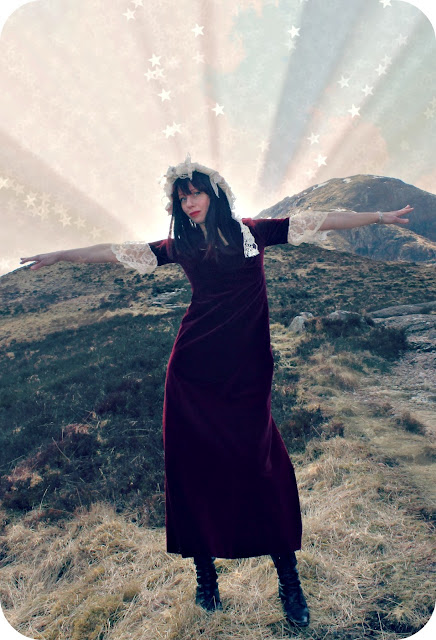 The Wikipedia article on Glen Coe you linked is fascinating. I hope your other readers check it out too. Your descriptions had me smiling (guiltily) as I mentally pictured how the heavy weather would have had a sail filling effect on your dress and your wig security at the first location. I hope your hubby Mark got some photos of your frocking up process for your album full of memories. The QUAD frock you were wearing in these photos is beautiful! I love look of the deep red velvet and the flaring delicate lace portion of the sleeves. The wreath you made looks lovely with your outfit. My condolences on your having had a rancid hangover but I see no sign of it in these photos - your face looks pretty in them.
I love the music video of the song "Ready for the Storm" you embedded. It is, as you said, hauntingly beautiful.

That is a a great dress; I can see why it inspired you to do this outdoor magic-y photo shoot. I actually once had a red velvet dress that was similar (though I admit the lace was not quite as nice) and I could ever figure out when it was made. Now I think was probably around the same time as this one was.

Also sorry to hear you were feeling hung over during the shoot. How we suffer for art, eh?

You're a little mountain fairy!!

Such beautiful photos! You look like a heroine of a Scottish legend to me: free-spirited, strong and yet with a touch of romanticism.

You look gorgeous, definitely like a vampy hammer horror type. Can't wait for the next posts. X

That dress fits you so good and I'm a sucker for anything velvet! Lovely backdrop for your pictures, stunning really!
Xxoo

yep, that's definitely a tits up under the table Hammer movie dress. I loved watching those movies when I was a kid.

Love the top one best from this gorgeous shoot. What an amazing dress. Such a great colour. Also, there's a bit of a Helen Mirren look in your face on the 5th one down. Hope you didn't get too cold on your adventurous shoots! Can't wait to see the others! xx

Vintage red velvet and lace up boots are the absolute best!!! I want some of this Froach! You look great--not hungover at all!
Becky :)

jennie, great photos and a beautiful dress. have a lovely break. lucyx

you and the scenery look amazing!

Wow! I really love that dress - red velvet and lace, what a dream team. Love the back drop, very Hammer!