Priscilla Queen of the Glen 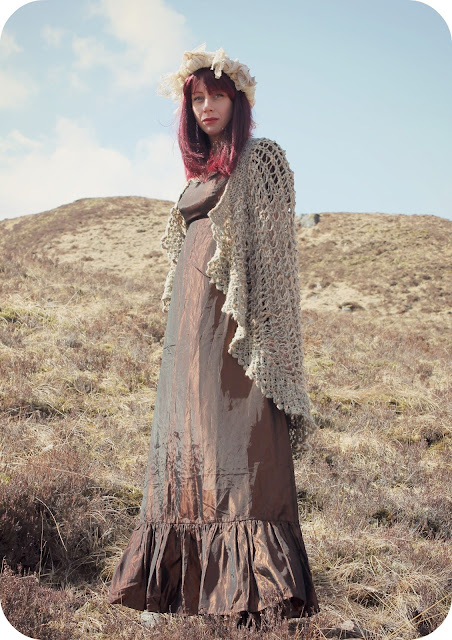 The second and last frock that we shoot in the glen was this extraordinarily stunning shimmering bronze taffeta creation labelled Priscilla of Boston.
I'm guessing that it is from the same sort of fashion era as the QUAD frock I blogged about yesterday. 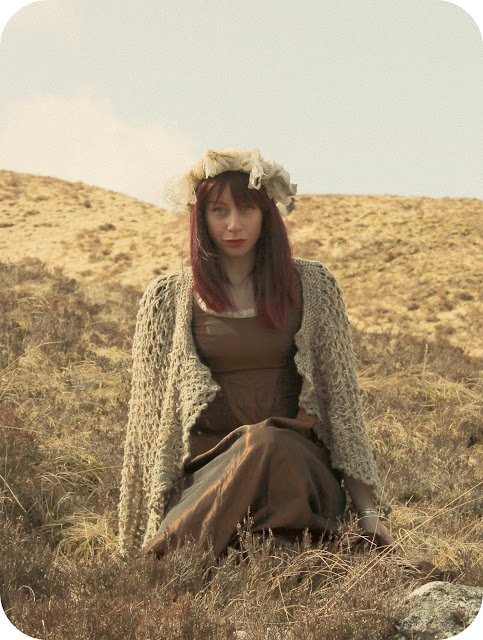 This frock makes me feel as if I've just sprung from the pages of a Jane Austen novel.
Fabulously bust enhancing empire line cut with delicate cream lace detailing to the neckline, adorable ruffle trimmed puff sleeves and a generously swishy skirt with ruffle trim hemline. The fabric glints and sparkles in the sun, fabulous! 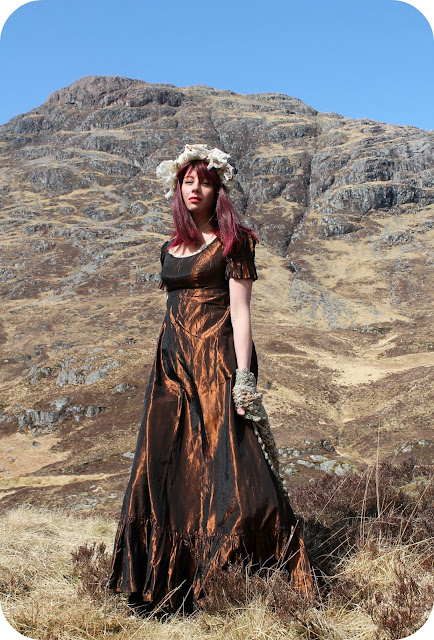 I bought this spectacular frock from a vintage dealer some years ago and have been hankering to photograph it in an equally spectacular setting ever since. 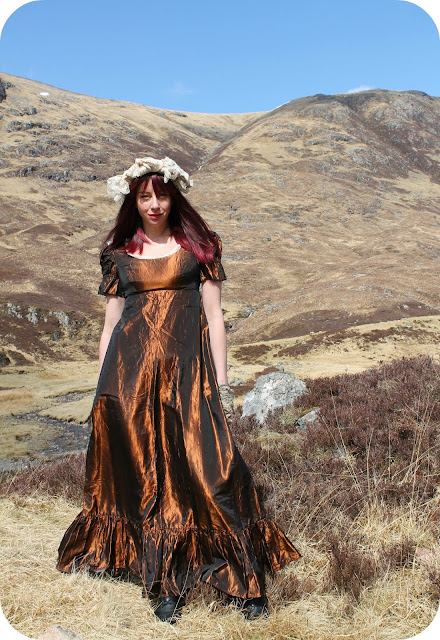 I was toying with the idea of taking it down to King's Bench Walk and doing a guerilla photo session but there are always so many people milling about in that area. Another nice spot in London for a photo session with a historical flavour would be the Pergola in Hampstead Heath. Neither of these places hold a candle to the stunning backdrop that the glen provides though and even if we did had a little bit of an audience on this occasion it's not as if people were walking in front of the camera as is often the case when trying to snap a few pics in London. 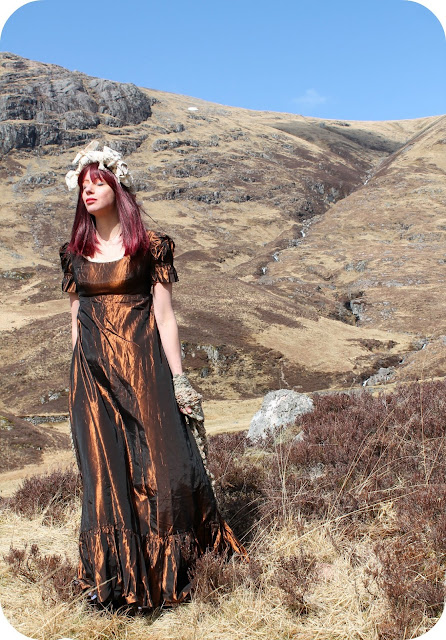 In the next post I'll show you the frocks that we shot by the Loch Leven shore.
It was tremendously windy that day so only a few pics came out alright.
Thank you ever so much for the fab comments you left on the last post, you peeps ROCK! 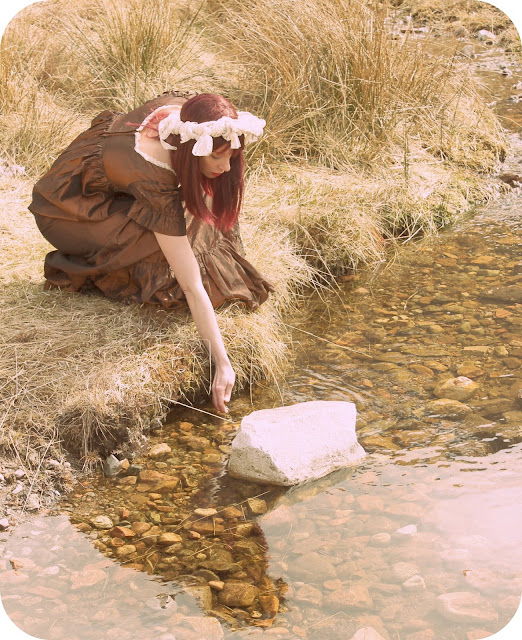 Pull Your Socks Up! said...

That frock certainly deserves the Priscilla tag, she's a raging beauty! I love these beautiful pics so much, I feel like I need to be there immediately ... must be past-life genetic memories bubbling away in my body and brain. You look amazing and so in-the-moment dear Jennie, with the long hair and headpiece - I'm still stunned at the beauty of the frock on your fabulous bod honey! xoxo

Wow, what a beautiful dress. The fabric is just amazing, I think exactly it makes the dress stunning.

That frock is a beauty! Could it have been made by the same "Priscilla of Boston" referred to in this article in the Boston Globe? Apparently that "Priscilla of Boston" shut down at the end of of 2011 after 65 years of making fine frocks and wedding dresses. Priscilla Kidder started it graduated from the New England School of design and had, according to the article, designed the wedding of Grace Kelly to Monaco's Prince Rainier.
It's stunning and the setting for the photoshoot is spectacular. You described it beautifully. I love the look of it as you're bending down to touch the water. Your post title is great. You do look like a Queen of the Glen. (not similar to what comes up if you start to Google "Priscilla, Queen of the"). That frock really is an amazing design.
Fascinating video you embedded with the song by Wyledeck. I wonder who the woman in the dark frock in the video represents?

Gorgeous Dress and setting, tho isn't it a little too sunny for Scotland? Glad you finally got some. Love that vid and song, by the way!

That is one helluva gorgeous dress, you look absolutely beautiful in it! I love the colour and shimmer of that fabric, and the headpiece is the finishing touch. What an amazing place to do a photoshoot! These are magical photos.

Panty Buns, I checked the label and it is indeed the very one that you write about. I've now added a link to the Vintage Fashion Guild's webbie on the post, thank you for doing all the hard work for me, you're a star :)

I love that you put so much time into shooting an outfit. The Glen is a perfect backdrop for the shimmer of this dress. I love the last photo reminds me of a Waterhouse painting!
Xxxoooo

I love this photoshoot, the set is perfect and the whimsical light reflected on this lovely dress add a beautiful effect!
Love xxxxx

You look amazing!!! Gorgeous dress!! I agree, right out of a novel! Love it so much! Great song-- going to share it with X-man because I think he will like it.
Becky :)

jennie. i love your photo shoot. the backdrop i s very surreal and beautiful. your dress is stunning, i love the empire line. well done jennie. i'm looking forward to your next post. lucyx